Just out of curiosity what do Youkai (Demons) eat?

Just out of curiosity what do Youkai (Demons) eat?
Usually I think they eat humans, and or other demons, but not all do and other people meantioned that there are alternatives. So I would like to know what are these alternatives? Anybody know or have any ideas feel free to share your imput.

And oi don't be afraid to bring on the detail, I asking this pergunta because I'm composição literária a story which involves many demons and am just out for some new ideas. Also so you know if I like the idea it could turn up in my story, so if it's an idea you'd like to keep for yourself don't post it.

Below is an image that I found called Shinsengumi Demons, that pretty much all I know about it, though I thought it looked cool so I uploaded it. 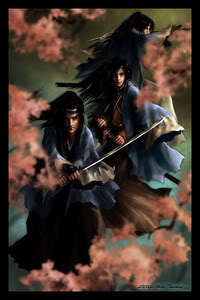 Just in case there's information in other animes that I haven't see but other may know about, or from other sorces of information.... yah I am lazy about looking it up myself, but I would like other people's own ideas as well. So any help?
sesshyswind posted over a year ago

that is a cool picture
katana64 posted over a year ago