7
Not Everyone Gets a Happy Ending
posted by emzypemzy
I am soooo excited about the episode it's unreal, and (aside from plenty of Huddy smut ideas) this would leave me alone, so thought I'd put it on here. Not exactly Huddy, but kind of...I think.

"No, I want to hear about the sad hero again." a 3 ano old Rachel Cuddy whined to her mum as they lay on her bed. 'She loves that story.' she thought, remembering back to when she made up taht story after a particularly tricky dia at the hospital. She took a deep breath and exhaled, removing those thoughts from her head with the air from her lungs she began her tale:

"Once upon a time, in Princetonia there was a man, a man of greatness, a man with great courage and brains. He was a saviour, he healed people, the people that everyone else gave up on he saved, brought them back from the very brink of death. He was great, he was invincible...but then there was a tragic accident and he could no longer run, a wicked witch turned him into a monster.
The previously great healer became a monster, a broken man. He was a shell of his former self, he hid himself away from those around him, not seeing anyone, not talking to anyone, ashamed of what he had become. He continued to save people, but he was shunned for his strange methods and seeming uncaring attitude. To him names no longer mattered, what you did didn't matter, he saved them all. But when he lost one he lost a little bit mais of himself, and nonody saw it.
He hid behind his mean streak, hid away from all those who cared for him, but the fair madein saw his suffering, and his suffereing became hers too. She was in amor with him, she was in amor with the Beast. She could never say though because she was not allowed to be with such a man. He was not in her 'plan', he was too self destructive to make her happy, or so everyone said. She didn't believe that, if she could make him even marginally happier then she knew that she would be happy. He was a hero, and he deserved to be thanked. She knew that although he said he didn't care that he cared mais deeply than anyone she knew, that he didn't just care about the puzzle, he cared about the life he was saving, it was just easier for him to say he didn't care. Then nobody would pity him, he was too horrible to pity. And he needed it that way in order to cope, in order to stay sane.
She loved him from afar, too afraid to get her coração broken. Too afraid that he would hate her. Those around them saw it, saw that she didn't see him as a monster. Saw that it didn't matter to her that he couldn't run, that she didn't care that he was broken, that she knew that that was who he was. But he never could see it. And he remained a sad hero. Alone and afraid no matter how hard he tried to hide it."

Cuddy looked down at Rachel who was almost asleep. "Who is he mummy? Is he happy now?" She asked softly.

"Yes, he's happy now." Cuddy replied, beijar her daughter's forehead. It wasn't the truth, but a 3 ano old didn't need to know the harsh truth of life: not everyone ends up with a happy ending.

Rachel Cuddy ran from the nurses' escrivaninha, mesa the segundo her mum's office door shut. She was following the flames on the tip of a cane ahead of her.
"House." She called out to him.
He turned around and looked down at the wee girl, smiling slightly at her following him.
"What'd you want kid?" He asked, looking down at her smiling at him.
"Up." She said, holding her wee arms towards him.
He shook his head, "I can't." He said and even a three ano old could detect the sadness in his voice.
"Please, Uncle House." She begged with cachorro, filhote de cachorro dog eyes and a pout.
He grimaced knowing that he could never refuse her when she pouted like that. He knew his thigh was going to scream in protest, so popped a vicodin before bending down and picking her up as quick as he could. She put her wee arms around his neck as he balanced her on his left hip, cane in the other hand as he held her up.
"Giddeee-up horsey!" Rachel chanted with a grin.
"I'm not going to run." He said down to her, noting that she had a definite 'Cuddy' things about her. She was definately Cuddy's kid, eventhough it wasn't por blood.
"Why not?" She asked with a frown.
"Cause I can't." He muttered quietly before looking away as he began moving towards Cuddy's office to take her back. In looking away he didn't notice the widening of Rachel's eyes as he said that.
ammeboss, AwesomeHippie and 5 others like this
tvluva49 Great job!!!! :)
huddy4everfan Love it !!! Bravo!
alenapaula Soooo cute! ;-)
sarahuddy i love it??? continue please.....
Hughlaurie4ever I lvoe it!!! CONTINUE!!!
toxxickiss it is so cute good job i love how ya had cuddy as the fair madein lol cute!!
ammeboss u could just have rachel call house as gerg or house nt uncle house ....so is dat the end lisa cuddy nt marrying house !! nt possible its huddy,,, cuddy will finally marry sad hero HOUSE .. at least i hope
9
When did House and Cuddy slept together?
posted by elenita_93

Everybody knows that House and Cuddy slept together one night or at least House understood that in the episode ‘’Top Secret’’ (You gave me everything I asked for because one night I gave you everything you asked for...[House]) but we are not sure about when, maybe before House met Stacy or after, we don’t know, well, I was thinking about it and I remember some episodes that can say something about when they met and when they slept together.
In the episode ‘’Three Stories’’ Stacy was with House and Cuddy already knew him, when Cuddy hired House he was already limp (In ‘’Detox’’...
continue reading... 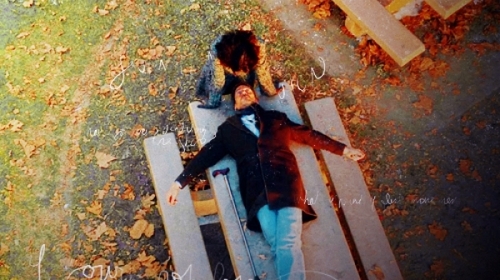 8
Huddy Screenshots
added by Criss42
Source: screenshots
21
Huddy: Elevator sex prt 4
posted by Fabouluz
(Cuddy stood up, and tried the button again. Letting out her frustration on it, before sitting down again seguinte to House.)

(Cuddy held her head in her hands.)

(House observed her, before popping 2 Vicodin.)

(House gestured for her to lean on him, and she did. House put his arm around her.)


It was now 3 am. Cuddy had fallen asleep on House, who was still awake and starting to be in mais pain.

(Cuddy began to wake-up and suddenly jolted from House.)

Cuddy: What time is it?

Cuddy: Are you in...
continue reading... 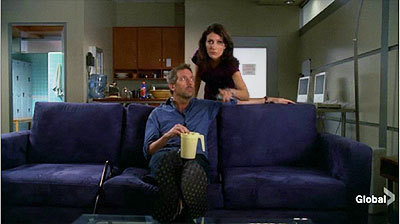 19
House and Cuddy
added by Criss42
Source: fanforum.com
40
"It Happened One Night":(Huddy Sex Scenario 1)
posted by rosehustle1
"You didn't have to come over, Cuddy. I'm fine now."
"House, you blacked out in the middle of a differential. Then you blacked out again when you were with a patient...It seems like what we hoped wouldn't happen has..."
"You think this is from what I did to try and save Amber?"
"We knew there could be bad side effects, irreparable damage to your cognitive skills and brain functions."
House shook his head and sat down on his sofa.
"It's been seven months and I've been fine."
Cuddy sat down seguinte to him.
"I just said it's a possibility we won't know until we do mais tests. Don't worry yet."
House leaned...
continue reading... 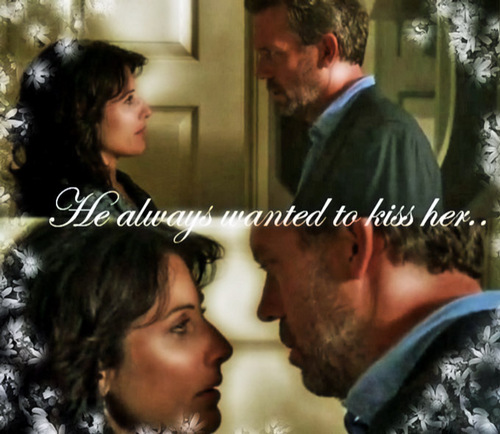 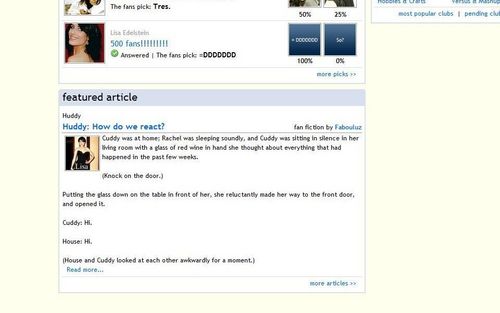 6
I got a featured article!! :D
added by Fabouluz
14
The Wrong Time For The Right Feelings: Part Five
posted by rosehustle1
"So, would you mind telling me what the hell was up with you at dinner?" Cate asked as she slipped under the covers of his bed.
House looked up from his book and took off his glasses.
"I wasn't in the mood for small talk."
"You're never in the mood for small talk. I expected you to be grouchy, but you seemed very focused on being a particular thorn in Luke's side tonight."
"What are you trying to say, Cate? I know you've come up with some analysis so let's hear it."
Cate sighed to herself and turned her back to him.
"Let's just go to bed." She said as she turned off her light. House let out...
continue reading...

19
House grabs Cuddy's breast
added by EnjoyHuddy
hi guys!! Sorry if I'm not around but my mom punished me and I won't be able to be online for a mês :( But I found this vid so I tought you should enjoy it! :)Miss you!!
video
huddy
cuddy
house
house md
34
"It Started with a Chair": (Huddy Sex Scenario 8)
posted by rosehustle1
"Isn't it time for you to go início to the rugrat?" House asked as he sat down in his ergonomic chair.
Cuddy pushed his feet off the ottoman and sat down too.
"She's spending the night with her aunt Lena...Lena wants some practice taking care of a child. David and her are trying to get pregnant."
"So, why aren't you heading home? You a have free night to yourself for the first time in months and you spend it at the hospital?"
"...I wanted to talk." She replied looking down at her shoes.
"About?" He asked.
Cuddy looked up and smiled weakly.
"You found out that Foreman and Dr. Hadley have still...
continue reading...

17
Underneath (House/Cuddy)
added by PotterGal
A House/Cuddy(/Wilson) video that looks at development of House/Cuddy both literally and metaphorically in the context of Joy, and even mais so, The Itch. Made por lissie1018. - Click the Arqueiro seguinte to the título to view :)
video
house
cuddy
fanvideo
huddy 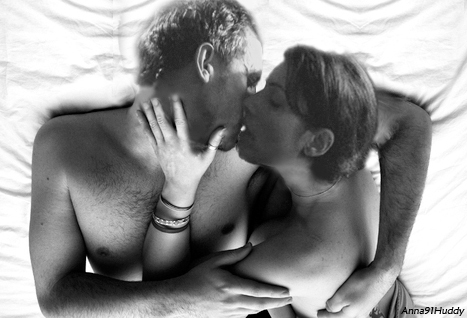 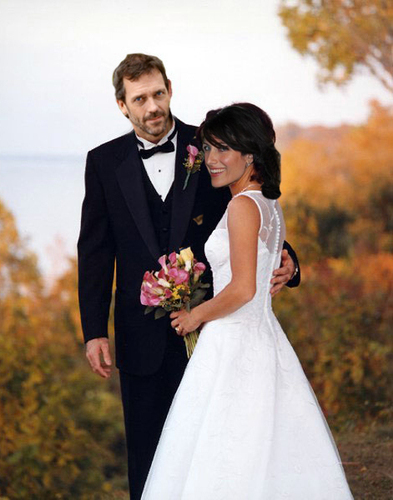 11
Huddy manips...
added by EnjoyHuddy
Source: unfortunately I didn't found any...if you know who made them, plz tell me 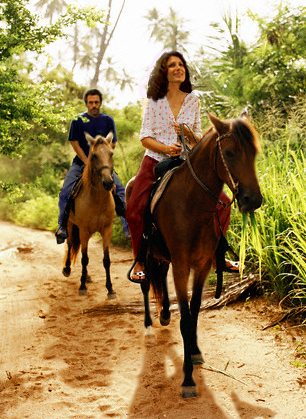 6
Huddy manips...
added by EnjoyHuddy
Source: unfortunately I didn't found any...if you know who made them, plz tell me 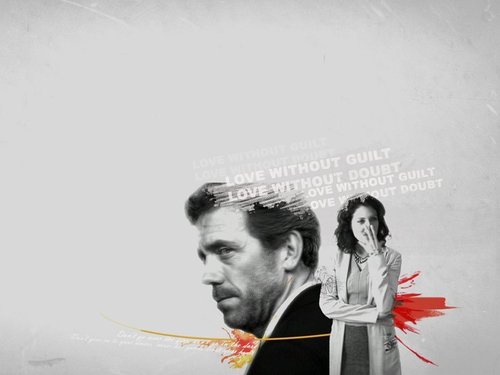