1
Grapevine High School Prom
posted by lucaslove96
Demi Lovato went back to Texas to attend prom with childhood friend Nolan Nard. She wore a beautiful red dress and let her hair down for the event, sporting her new BCBG Herve Leger clutch. Demi and her friend Nolan took a few pictures before the Grapevine High School Prom. Demi’s wish of attending prom, just like every other 17 ano old girl, finally came true! She tweeted this weekend:

@ddlovato – A promise made in kindergarten finally coming true.. Prom with @nolannard!!

Sounds like the two had a wonderful time at Prom because after the event, Nolan tweeted:

@nolannard – Prom was incredible. Everything about last night was amazing. 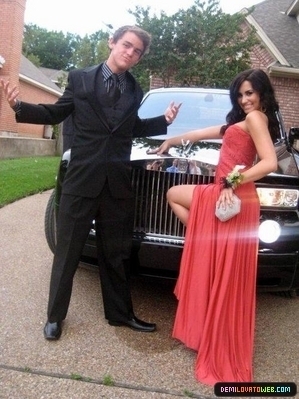 Demi Lovato with Nolan Nard at the Prom
1
Demi Lovato has erased the tattoo Stay Strong? Photos!
posted by maritina12345 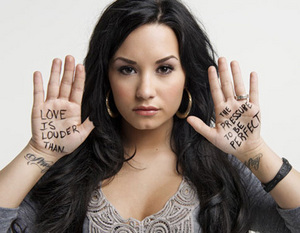 
"Stay Strong" was where the tattoo with Demi Lovato had put an end to his time in rehab. The rehab was for Demi experience as great as tiring: months of analysis and work on herself to overcome a moment of excessive stress and problems of various kinds.

The fotografia you see above was published por the same estrela just out of the clinic: Stay tatuagens on display (left wrist) Strong (right wrist), or "Hold", "Be strong", a sort of reminder...
continue reading...
2
Demi Lovato: `I used to throw up blood`
posted by Greekgirlishere 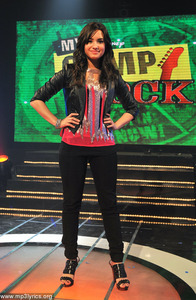 Demi Lovato has admitted that at the height of her eating disorder, she would make herself vomit until she threw up blood.
The actress was released from rehab earlier this ano after seeking help with bulimia, bipolar disorder, and self-harm.
Talking to People, she opened up about the horrifying details of her illness.
'When I was about 15, I was only eating two meals a week, but I wasn't losing any mais weight because my body adjusted to that. So I tried new things: laxatives, fasts - nothing was working,' said the 18-year-old.
'I decided maybe I should start throwing up. At my worst, I was doing...
continue reading...
4
Who's That Boy
posted by nmdis
"Who's That Boy"
(feat. Dev)


[Intro: Dev]
I wanna get you por yourself
Yeah, have you to myself
I don't need nobody else
Don't want nobody else
He's special, I know
His smile, it glows
He's perfect, it shows
Let's go!

[Verse 1: Demi Lovato]
I've been starin' at ya
And I could do it all night
You're looking like an angel
With that kind of body needs a spotlight

[Chorus: Demi Lovato]
Now I don't know who you are
But you look like a star
And everybody here...
continue reading...
5
You are my only shorty
posted by nmdis
"You're My Only Shorty"
(feat. Iyaz)


Last night was crazy and today it's setting in
Did you really mean it and could you say it again?
Oh-oh, even if you just say it over the phone
Come on, ring, ring, ring

amor makes me crazy, restless, dumb and paranoid
But I'll take a chance on us and hope you don't destroy my heart
Just give me one guarantee, I'm the only girl you see
What you say, boy

Don't say you're sorry, 'cause I'm not even breaking
You're not worth the time that this is taking

I woke up the next...
continue reading...
5
DEMI TALKS ABOUT HER favorito ARTISTS AND ROLE modelos
posted by maritina12345 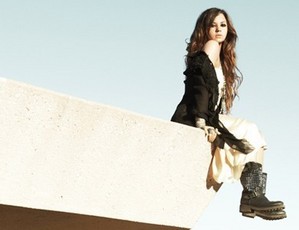 I chose to make this album more R&B because it’s something that I haven’t done before and I just really wanted to experience what it would be like.
Demi also talked about the sound of Unbroken, her goals, and her favorito singers.

About the R&B inspiration on her new album:

I chose to make this album mais R&B because it’s something that I haven’t done before and I just really wanted to experience what it would be like. I don’t know if it necessarily best represents who I am so I don’t know if I’d do it again on the seguinte album, but you never know. Sometimes I go into an album prepared to record say a pop album and it comes out pop-rock, so you just never know what can happen!

About going back to acting:

“The two have not been seeing each other for long since Demi is so busy, but like they are together as a couple. They were introduced por a mutual friend not too long atrás and have been chatting and seeing each other ever since. Demi is in L.A. right now and Alex isn’t - It makes the relationship hard, but the two are dealing with it and trying to make it work without the press - It’ll come out sooner or later since he’s been seen at a lot of Demi’s shows and they are not really trying to hide anything.”

EDIT: “It was too hard for them to spend time together with being on the road and stuff. Just wasn’t working, but they remain good friends.” They split! What do you guys think?
Warrior Lyrics ♥
posted by Miraaa 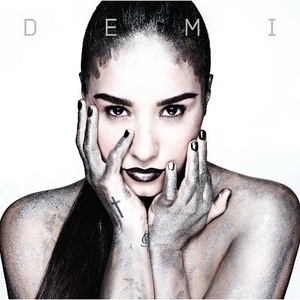 All the pain and the truth
I wear like a battle wound
So ashamed, so confused
I was broken and bruised

Out of the ashes, I'm burning like a fire
You can save your apologies, you're nothing but a liar
I've got shame, I've got scars
That I will never show...
continue reading...
8
Two Pieces
posted by nmdis
"Two Pieces"


There's a boy, lost his way, looking for someone to play
There's a girl in the window tears rolling down her face
We're only lost children, trying to find a friend
Trying to find our way back home

I know where we could go and never feel let down again
We could build sandcastles, I'll be the queen, you'll be my king
We're...
continue reading...
You Might Also Like... 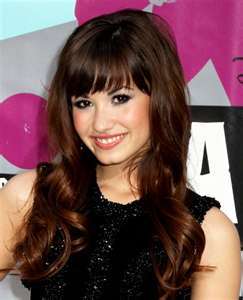 Demetria Devonne "Demi" Lovato was born on August 20, 1992 in Dallas, Texas. She is an American actress, songwriter and musician. Her mother, Deana Lovato, was a country singer and a Dallas Cowboys Cheerleaders. Demi has two sisters, Dallas, who is five years older, and Madison, who is the little one. She studied at cruz Timbers Middle School in Grapevine-Colleyville Independent School District, where she was a part of the choir. She achieved many talent contests in Texas. At the moment, she is início schooled por tutor due to her hectic schedule.

Demi began her atuação and cantar career as Angela...
continue reading...
Are Demi and Wilmer going to THE seguinte LEVEL???
posted by MaddieDLGarza
Demi Lovato mannaged to keep her relationship with Wilmer Valderrama under wraps for mais than a ano and it seems going public with their amor has only made it stronger.
In fact, the couple are gearing up to make an ever bigger announcement, with the handsome reformed ladies' man set to pop the pergunta - even though Demi's 12 years his junior, A friend of the loved up pair says Demi, 19, and Wilmer, hid their romance because of their age diffrence, but they've been serious for some time and are now planning to make it official. "They've been looking at rings and Wilmer asked Demi's family for permission." says the friend, adding that they're both keen to foca, selo the deal. "Wilmer's going to be 32 this month, so he is ready to settle down, And Demi's madly in amor with him, so they're getting engaged" 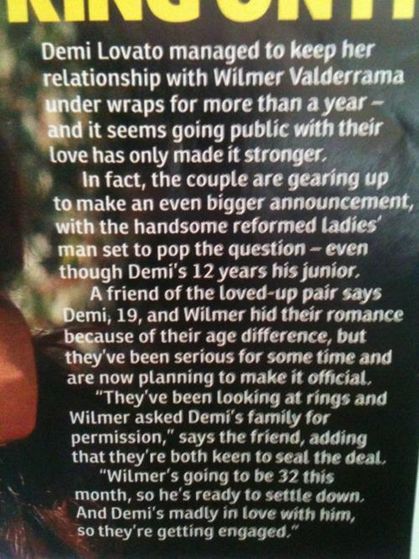 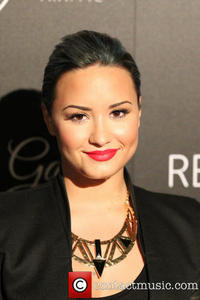 
Demi Lovato has got her friend's back as she speaks out about warning Kanye West to treat Kim right.
Kim and Kanye recently became engaged and Lovato is mais than happy for the duo but prior to the proposal the X-Factor judge claimed to have warned West not to hurt the Kardashian sister.
The 21 year-old joked to E!News, "I've told Kanye before that if he doesn't treat her well, I'm going to come after him."
Kanye proposed to Kim on her 33rd birthday (Oct 21st) in one of the most extravagant...
continue reading...
Clear Here We Go Again Lyrics
posted by kittendrawings
I throw all of your stuff away
And then I clear you out of my head
I tear you out of my heart
And ignore all your messages
I tell everyone that we are through
Cause I'm so much better without you
But it's just another pretty lie
Cause I break down
Every time you come around
O Oh O Oh 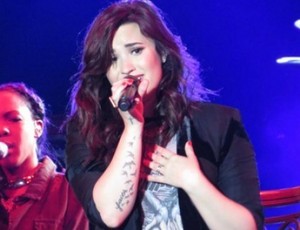 "'Heart Attack' was inspired by being in a place of vulnerability. Which I'm sure many people can relate to."
Demi Lovato answered perguntas about everything in a short live chat she did with her fãs on Twitter. Here's what she had to say in her #AskDemi session!

Info about her new album: "You can expect a little bit of everything from my seguinte album. All my other albums times 10."

The artist she's amor to work with: Eminem

Motto: "My life lema is stay strong, hang in there, it all gets better. It's always darkest before the dawn."

Dreams: "My personal dream is to get married...
continue reading...
1
coração attack
posted by superDivya 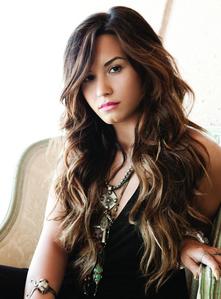 Puttin’ my defences up
'Cause I don’t wanna fall in love
If I ever did that, I think I’d have a coração attack

Never put my amor out on the line
Never said yes to the right guy
Never had trouble getting what I want
But when it comes to you, I’m never good enough
When I don’t care, I can play 'em like a Ken doll
Won’t wash my hair, then make 'em bounce like a basketball

But you make me wanna act like a girl
Paint my nails and wear high heels, yes you
Make me so nervous, that I just can’t hold your hand

You make me glow,
But I cover up, won’t let it show,
So I’m puttin’ my defenses up
'Cause...
continue reading...
11
angel Among Us
posted by nmdis
"Angels Among Us"


I was walking início from school on a cold winter day.
Took a shortcut through the woods, and I lost my way.
It was getting late, and I was scared and alone.
When a precious baby boy took my hand and led me home.
Mama couldn't see him, but he was standing there.
And I knew in my heart, he was the answer to my prayers.

Oh, I believe there are anjos among us
Sent down to us from somewhere up above.
They come to you and me in our darkest hours
To show us how to live,
To teach us how to give,
To guide us with the light of love.

When life held troubled times and had me down on my...
continue reading...
3
La La Land
posted by nmdis
"La La Land"

I am confident but
I still have my moments.
Baby, that's just me.

Well, some may say I need to be afraid
Of losing everything.
Because of where I
Had my start and where I made my name
Well everything's the same
In the la-la land machine, machine.

Who said I can't wear my converse with my dress?
Well, baby, that's just me!

And who said I can't be single
And have to go out and mingle
Baby, that's not me, no, no.

Well, some may say I need to be afraid
Of losing everything.
Because...
continue reading...
4
Don'T Forget
posted by nmdis
"Don't Forget"

So now I guess
This is where we have to stand
Did you regret
Ever holding my hand?
Never again
Please don't forget
Don't forget

But somewhere...
continue reading...
5
After Shock
posted by nmdis
"After Shock"


Beats so heavy, make my head get hazy
Big boots make the ground shake crazy
Body so hot, feel like they taze me
Kill the lights, watch the crowd get shady

Girls gettin' tricky, mover round like elastic
Boys turned on, you can see all the static
Charge it up, make it automatic
Stop the press, hear the kick go manic

[Chorus]
Lovestruck!
My coração is overheating and it won't stop
I try to slow the beating but you're so hot
The tremors keeps repeating and I tell my self keep breathing
But...
continue reading...
More Cards
1234567891011