Proven part VI
posted by SilverWings13
Proven part VI
Wayne Manor was huge. At least, the mansion was. People dressed for the occasion, either carrying or wearing various masks, streamed into the front door. Most wore dark colors, as Nic and I did, while others wore vibrant pigments, leaving rainbows in their paths.
Nic and I followed the river of people through the mansion. We exited the hallways onto a balcony.
Two curved staircases led down to the dance floor. There people mingled, holding glasses of champaign and various wines. A few held plates of finger-foods and other hors d'oeuvres. The constant chatter and clicking of heels blended to a steady rhythm, one that reach up the high, arched cieling, where a shining chandelier hung. The resulting image looked like something out fairytale-'Cinderella' or 'Beauty and the Beast'. No one noticed as the masked young girl and her partner descend the staircase
Scanning the crowd, I saw a man near one of the floor-to-ceiling-windows surrounded por a large group of people. Though his face was half-covered por a plain, black mask, I knew it was our host. All the other guests appeared older than myself, though a group near Bruce Wayne consisting of four teenagers stood talking, sipping glasses of punch. I took in the whole room, careful not to miss any exit routes, anything, anybody.
Suddenly I felt a presence. Immediately I put up a solid barrier in my mind, knowing from long hours of training that it was a mind-bender trying to get to me.
Nic nudged me and whispered quietly in my ear, "It's Ruse. Let him through."
I lowered the mental barriers slightly then, when I recognized the presence as Jasper's, all the way.
'Don't recognize me, Silver Wings.' I felt a small smile on my face as Nic began to lead me to the buffet.
'Just being cautious, brother,' I responded. Though Jasper wasn't related to me in blood, my team members were defiantly my family.
'Thirteen reporting for duty,' Alek said, or rather thought. As Nic and I reached Jazz seguinte to the camarão plater (his mask changing color as it reflected the light at different angles- black, then green, then dark purple, then black again), I saw Alek enter the room and begin to descend the stairs. He too wore a black tux. A white and orange-striped mask with kitty ears covered his face from the nose up, his slightly frazzled hair sticking up over the top.
'Hey, capacete hair,' I jested. He scanned the crowed until he saw us, then made his way over. 'Thanks for the ride home.'
'Sorry 'bout that. I was busy helping Blaze get things ready for tonghts's mission.'
'Speaking of the mission, what is it?' I asked.
"You didn't tell here?" Alek and Jasper asked in unison. Out loud. I fixed Nic with a speculating look.
"I'm not going to like this, am I?"
"Probably not," he responded with a shrug. I hated his cool deminer.
"Fine," Alek said, "I'll tell her."
'Not aloud,' Jazz reminded him.
'Right. Do you remember the exact details of the Weapon?'
'Of course,' I thought, 'a near flat cylinder measuring 2 inches thick and 4.75 inches in diameter, solid black, weighing barely mais than a standard throwing knife-about 200 grams, cold to the touch, most likely made of light weight titanium.'
'And the opening?' Nic prompted.
'Opening?' I picked up a camarão from the plate Jazz was holding and nibbled on it.
'The Weapon you saw was only a case. An outer shell,' Jazz explained.
'You didn't really think the Weapon was a círculo of metal did you?' Nic criticized.
'Cylinder,' I corrected. 'So how do you open it?'
'With a key,' Alek said, 'And that is why we are here.'
'Why would it be here?' I asked, getting annoyed that I was so out of the loop.
'Our sources tell us that an exchange between the current key holder and his employer would go down here,' Jazz informed me.
It made since. A subtle hand-off in this unsuspecting crowd would not be difficult. If you added the masks to hide your identity and easy access in and out of the building, you had the perfect meeting place.
'And who is the current handler?' I asked rescanning the faces again in my head, though the masks were of no help.
"We don't know," Jazz stated vocally.
"You don't know?" I said incredulously.
"That's not completely true," Nic corrected, then laughed as if something were funny. I joined in, knowing the interruption was to keep up appearances, making the crowd see us as four people simply enjoying their selves and not getting ready to steal... A key. "The handler is in the Mansion," Nic continued, "Probably." If it hadn't breaken our cover, I would have facepalmed and groaned. Or slapped Nic for being a smart-ass. Instead I settled for a glare and a sigh.


I wanted to get this up 'cause it's kinda long and I wanted to give you guys something while I worked on the rest. Posting mais soon!
66Dragons YAY!!! This is gonna be GOOODDD!!!!!!!!
Revenge or Redemption RE-PUB Chapter One
posted by 66Dragons
Chapter One- "Assassin"

He had ten calmly walking towards the school when the first shot had been fired. A .50 Caliber grazed his neck. Immediately all of the students on the campus ducked for cover.

Sam pomba behind a pillar and quickly took off his jaqueta to reveal the infamous crimson dagger beneath.

This time, the assassin never saw it coming. The dagger flew through the air and impaled itself in the barrel of her sniper rifle. The assassin saw the dagger and leaped for cover as it exploded.

A moment later, Revenge had grabbed her and swung to the nearest building. Before...
continue reading...
Silver Wing's Intro: Feed back much appreciated!!!
posted by SilverWings13
This is my 1st fanfic ever! I hope you like it!
Her breathes were gasps as she raced through the near abandoned streets of Gotham City. The rain soaked her clothes; the puddles splashed as she ran through them. The pack on her back felt heavy as she cut through an alley. A man exiting a bar cursed as she passed, nearly knocking his drunk bunda to the ground. mais curses followed as her persuers rushed pass him.
They were gaining much too quickly for her liking. She could have easily out run them if it wasn't for the STUPID pack! She considered ditching it in the gutter, but dismissed the idea....
continue reading...
1
Worst dia Ever
posted by Skittles98
Not mine! This artigo is Property of Bat-dove on Fanfiction.net

Wally's not the most popular guy. Not in school, not on the team, not as a hero, not anywhere. So what happens when he is suddenly swarmed por people?

'Ah face book,' Wally thought to himself, 'One of the most ridiculous yet useful things on the internet. It helped remind people of events that they were bound to forget, make friends they may never meet, and start fights that might have never existed.'

He himself rarely used it. He had one, but it seemed like a waste of time. But if he had been on face book, he would've known not...
continue reading...
Because I'm nice (bored) The Return Ch. 1
posted by 66Dragons
Chapter One-

Aqualad thought it would be better if the Team dividido, dividir in half for the flight over. So Holly, Revenge, Artemis and Wally were on one plane while Robin, Megan, Connor, and Kaldur were on the other.

Holly had listened to every song on her iPod and watched every video she had downloaded. She was bored and there was three hours left in the flight.

Artemis was asleep and Wally was drawing a moustache on her face. azevinho, holly couldn't wait until Artemis woke up.

Holly glanced over at Sam, which she had recently discovered was Red Revenge's secret ID. He had his sunglasses on and his hat low on...
continue reading...
1
coração of Courage Part III Ch. II
posted by 66Dragons
FINAL PART TOMORROW!!!

Revenge looked at the dagger impaled in the metal board centimeters from his neck.

The girl stepped back shakily.

"Kill him you insolent fool! Kill them!"

The girl took a shaky breath and picked up another dagger, she stepped back towards the hero again. She felt his eyes on her again. She raised the dagger slowly once more. Revenge looked at the girl and saw something he hadn't expected.

"I got ya." Revenge whispered.

The girl looked at him shakily. The dagger...
continue reading... 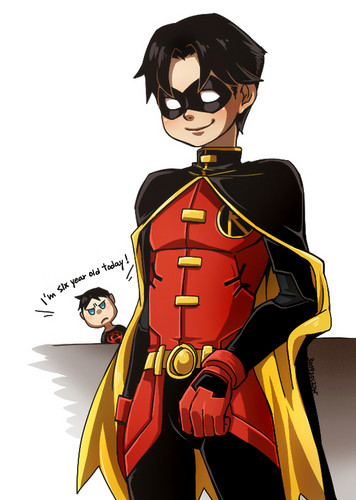 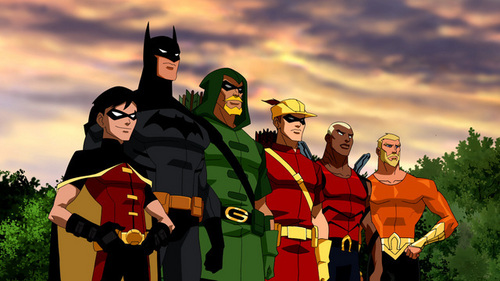 What Artemis does in the morning
added by ArtemisYJ
What I do in the bathroom...while getting ready to go to the cave...Enjoy.
video
artemis 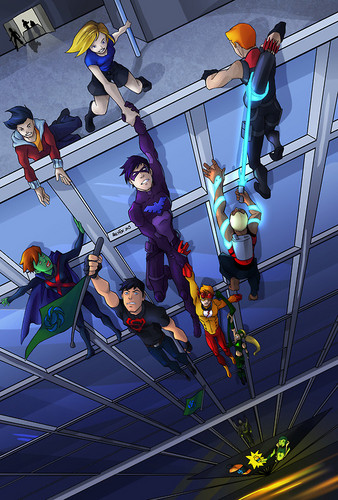 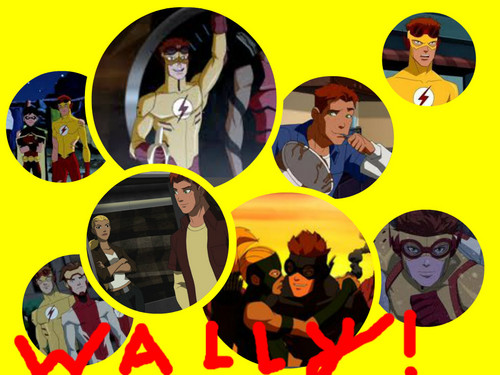 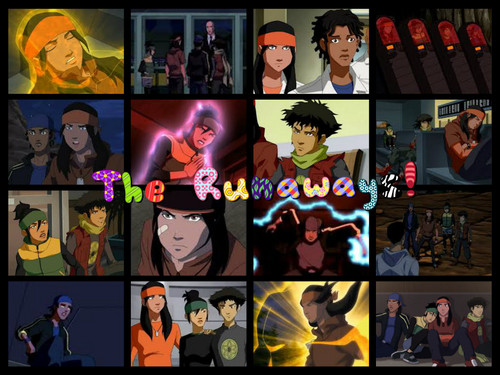 1
the runaways
added by rosedawson1 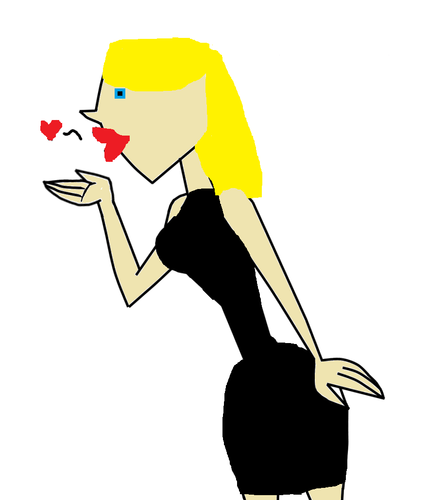 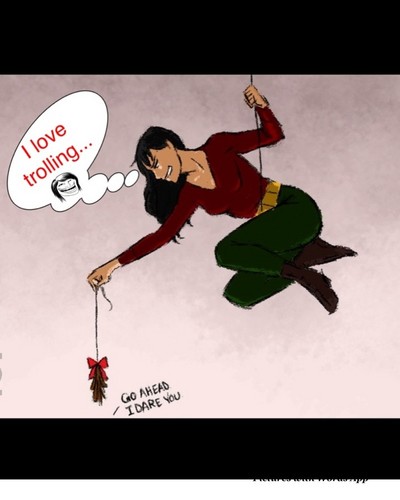 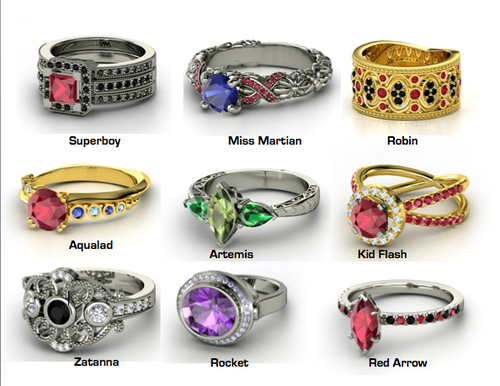 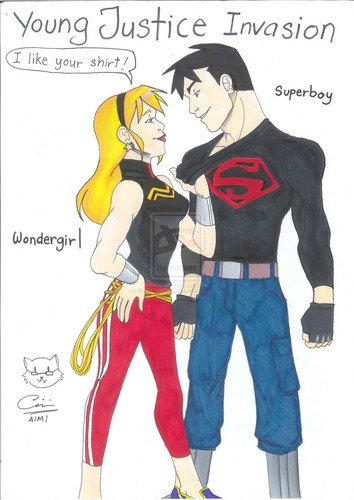 I like your camisa (Wonder Girl version)
added by Elemental-Aura
Source: tumblr 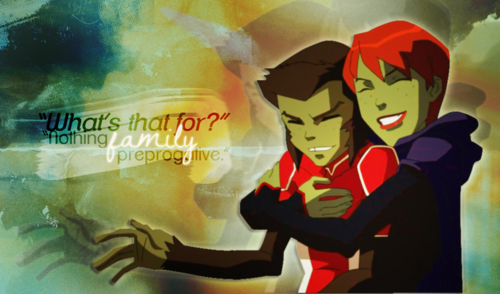 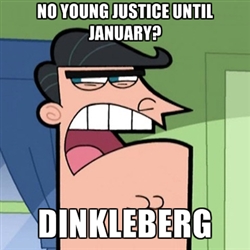 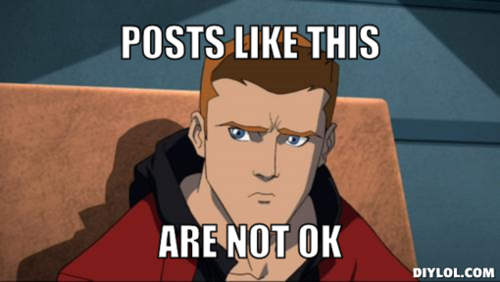