2
Blister's Speech
posted by SweetHoneyBunny
Fellow SandWings, I stand before you to discuss the well known 'sibling rivalry' between myself and my sisters Burn and Blaze. This has been going on for years and has grown to include almost all of Pyrrhia and has even started the hatred of the Talons of Peace. The Dragonets of Destiny, of which the Talons choose, are to choose the queen they feel best fits the role of SandWing queen after the passing of our dear mother, queen Oasis. The problem I see however is that they are too young and inexperienced to be thinking about how their decision may affect us all in years to come. They were raised away from their proper tribes and know nothing of how things work in the world. It's not enough to simply end the war, but to end it for good. Everyone has their own ideas as to who should be the queen. Burn and Blaze have their share of allies, but do they know who they follow or what they are doing? We SandWings have our pride just like any other tribe and that has been twisted por the promises and treachery of my sisters; Blaze with her IceWings and SandWings, and Burn with her SkyWings and MudWings.

I know most of you feel as though Blaze is the one to place your alliance with but is she really in this to give the best to her citizens? Being the youngest of the SandWing sisters you would think she would have learned from myself and Burn. She has grown to amor pretty things and nothing more, if she can get someone else to do her dirty work she’ll be fine. How many SandWings has she brought to the Ice Kingdom to freeze and wait on the war to be over? There is a reason we live in the desert and not in the barren wastelands of ice. Blaze has demonstrated that SandWings are as lazy as RainWings! Who wants a queen like Magnificent, Grandeur, Exquisite or Dazzling? All they do is lie around and take turns ruling the RainWings! Nothing gets done and they are vulnerable to attacks at any moment. If we were like this we would be nothing! Our treasure, secrets, everything would be free to take. This is Blaze’s idea of queendom, everyone does everything for you while you admire your reflection in the dented shield of a scavenger! Then there’s the IceWings to whom she is promising land if she wins. Each kingdom is where it is for a reason. For thousands of years we have gotten along fine with the area we have. Blaze thinks that even before she has a chance at the trono she can give things she doesn’t own away. What’s to stop her from giving away the antidote to our venom? We’d be as useless as a RainWing with its mouth clamped shut. Blaze does not have what it takes to rule an alliance, much less a kingdom. queen Glacier, the queen of the IceWings practical puts words in Blaze’s mouth, using her like a puppet. Is this who we want ruling our tribe? She could easily be over powered and challenged for the trono which would put us back to where we are now.

Burn loves nothing better then watching two dragões tear each other apart unless she is the one doing the tearing. She is the oldest of us and por far the most ruthless. She has a mean streak that doesn’t stop at other tribes. Allied with the SkyWings and MudWings she has surrounded herself with battle and gore and enjoys it. She rules with mais then a poisoned tail and fiery breath, Burn lives to fight. Her biggest ally, queen Scarlet of the SkyWings, held an arena in her kingdom where prisoners and traitors were forced to fight to the death for entertainment. Most of the battles involved SeaWings and IceWings with the occasional MudWing, SkyWing and even SandWings. Burn did nothing to stop the slaughter of her tribe as she watched from the balcony seguinte to queen Scarlet. SandWings would tear others apart or be torn apart themselves. She would smile her wicked grin and call for blood to the dragões below. If she were made queen, she would kill anyone who did something wrong with no hesitation; even if it were her own sister. She will stop at nothing. When the prophecy reached her ears she knew there was a chance that she could lose. Taking things into her own talons, Burn decided tamper with destiny and killed the SkyWing egg and its carrier. Burn can be compared to queen BattleWinner of the NightWings, she doesn't know when to stop and does whats best for herself instead of her tribe. She does her dirty work through Morrowseer similar to how Burn uses other dragões until they are useless. Her alliance with queen Scarlet is no better! Scarlet's arena is a blood bath and both of them loved watching it. Scarlet however is now missing and probably dead after trying to mess with the prophecy.

My alliance with the SeaWings was a smart idea from the start. For one, they are able to hide an entire kingdom from the nosey NightWings, and are capable of taking down a squad of highly trained SkyWings intent on destroying them. queen Coral is one of the better allies to have, she knows what its like to lose loved ones to this war and I understand that. It is hard to lose dragonets not yet out of their eggs and your mate all at the same time but Coral pushes through it to rule her kingdom. She is a strong example of a true leader of whom I have on my side.

The Kingdom of Sand needs a queen, but not just any queen. We need a queen who can keep us alive and strong. A queen who can understand the pains and troubles of her fellow dragons. A queen who can understand the hardships that come with ruling a kingdom. Burn and Blaze are giving us SandWings a bad name. This needs to stop, we need a real queen.
kpaw05 and DragonAura15 like this
matau99 This is a wonderful speech! I personally think Blister would be more pro-NightWing (and not mention the queen of the NightWings by name, if she even knows it) but I could see her saying this!
SweetHoneyBunny Lol thanks :)
DragonAura15 Amazing!
mrozinski19 ya that was great 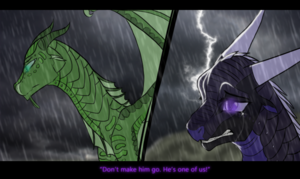 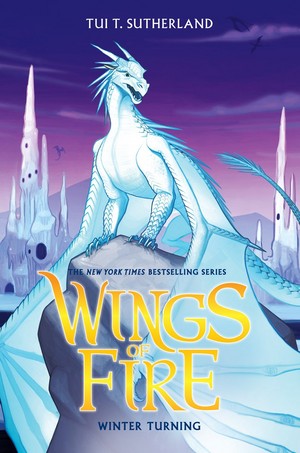 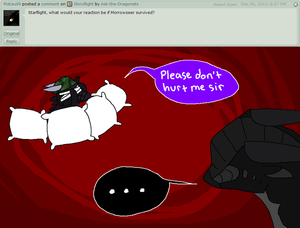 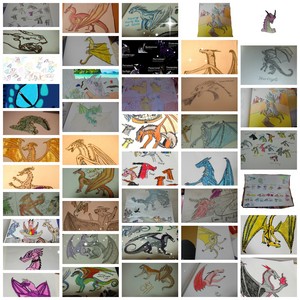 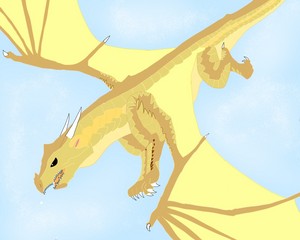 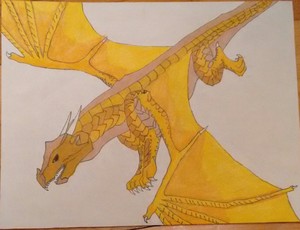 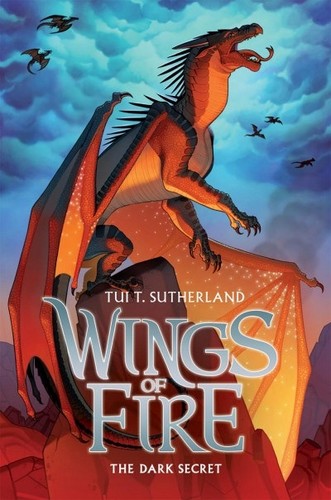 Wings of fogo
added by Frostfur122
2
Why the NightWings Aren't Evil
posted by matau99
First: Starflight

1. Starflight is one of the dragonets of destiny, and considers Glory, Tsunami, and Clay his siblings, with Sunny as his crush. He cares about them greatly.
2. His intelligence has been one of the dragonets' of destiny greatest assets.
3. He saved Clay's life in the river with his advice, found a way out of the SkyWing prison, found a way past the SeaWing prison, and has helped his team invaluably.
4. Starflight was reluctant to betray his friends, and hated being the only one saved from the SkyWing arena. He felt awful about being asked to pick Blister.
5. Despite him being a...
continue reading... 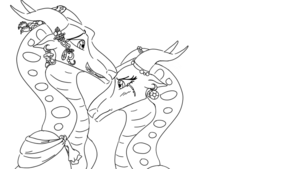 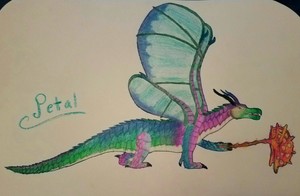 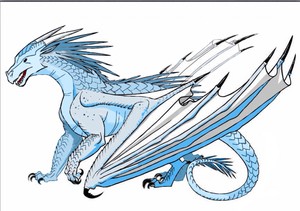 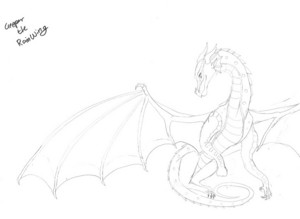 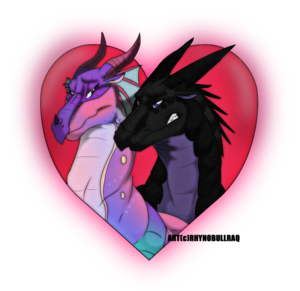 3
Glory and Deathbringer
added by DragonWolf17 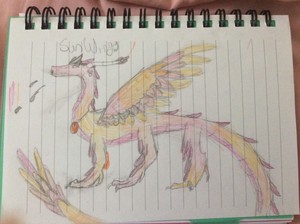