The First Alice
The first ALICE was a red worrior woman,
Charging gallantly into WonderLand with her sword
I order to escape the woods,
She cut down all who stood in her with a blood wake.
The first ALICE, somewhere in the woods
Was finally traped and locked away as a criminal.
Were if not for the paths she made,
No one would ever know she was there in the first place!

*So the first Alice killed many people. Thats why she is red most of the time. Alice was finally locked away as a killer. But the bloody trails she made in the woods proved that she was there in the first place. She is usally wearing red in most pictures, with a sword or, sitting in blood. Sometimes covered IN red blood! Gross right? Well maybe its cool but whatever! So I kinda just sumed up the story for you guys!* 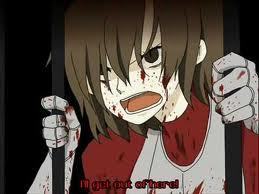