Gran Turismo Episode 10 Part 5
posted by Seanthehedgehog
Tim, and Julia were back in the hospital, visiting Dan.

Dan: The doctor says I'll be out tomorrow.
Tim: Good news.
Julia: Now it's time for bad news.
Dan: What happened?
Julia: Remember Black Tuesday, and Stargazer?
Dan: Yes. What about them?
Tim: They were the ones in the Matador you told us about.
Dan: I see. Last time you chased him, he was driving a Mustang.
Tim: Yeah. I think he might switch cars on us again.
Julia: We'll keep our eyes peeled, and see if he ends up in a different car again.
Dan: Right. por the way, how is everything with the jurisdiction?
Tim: At the moment, not too good. We're gonna talk to the Captain about it.
Dan: Maybe it'll get better when you talk to him today.
Julia: One can hope.

At the police station, they tried talking to the Captain about it again.

Captain Jefferson: You two, we've talked about this already. No means no!
Tim: Captain, we notified Highway Patrol, and State Troopers about those two heading towards them as soon as he got towards City Limits, but they didn't get prepared in time, and they escaped, again. Now unless they start cooperating with us, I'm gonna keep asking for our jurisdiction to be expanded.
Julia: Me too, and so will half of the other officers, not just in this station, but all over this town.
Captain Jefferson: I get it. I'll try getting our jurisdiction expanded again, but if they say no, I won't try anymore.
Tim: Thanks Captain. We'll see you at briefing. *Walks with Julia to the briefing room*

As they sat down, Toby walked into the room, and began talking to Tim, and Julia.

Toby: Did you talk to Jefferson?
Tim: He said he'll try again, but this is his last attempt. If they say no, he won't try anymore.
Toby: Chasing those two is getting to be annoying. The stallions know where to go, and when.
Tim: Why don't we use that to our advantage?
Toby: Come again?
Tim: They know when, and where we are at certain times of the day, for the time being. What we need to do is get as many units as possible towards the city limits to Canterlot, when they think they'll be somewhere else.
Captain Jefferson: *Arrives* Okay everypony, here's what I want to talk about today.

When briefing was starting, Stargazer was at his house with Black Tuesday.

Stargazer: They know the yellow car too well now. So we're going to use something different.
Black Tuesday: *Sees something under a tarp* Did you decide to store the Matador under there until it's seguro to use it?
Stargazer: No. I sold the Matador, and got something else. *Moves the tarp* 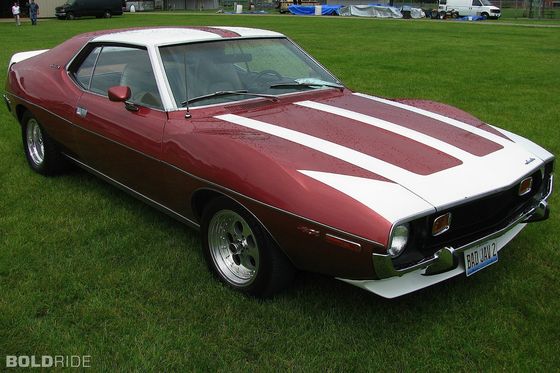 Stargazer got another AMC, this time, a Javelin.

7
Then she got an idea...
added by btflash
Source: Some guy on memebase; also hasbro