over a year ago ShizuoHeiwajima said…
Hey you just post here to put the character you wanna be...

over a year ago ShizuoHeiwajima said…
Yeah, Sure. You can tell / Ask your friends to join also if you dont mind.

over a year ago yaoigirl450 said…
can I join?
I want to be some one that's not on Durarara, because I don't watch Durarara alot.

over a year ago Xenok15 said…
:o well~probably? xD but this person is SLEEPING!

over a year ago SoulEater-Roxs said…
I dont think you can, Cause This is a Rp for Durarara characters only....Sorry.

over a year ago IzayaOriharaKun said…
I think i'd be pretty decent at playing myself~ What do you think, Shizu-chan?

over a year ago durararafan1212 said…
Can I be Saki?

over a year ago pinkmare said…

I have an oc :) okay here's the 411 about her.
when she was four her father was killed by drug dealers as they vow revenge on him for not getting them off at the judge court because one of them made a deal to him never to let the judge know they were guilty , anyways one of them sneak into the office and stab him with a dagger and she has been living in a dark cloud ever since anyways as she started to grow older her mother started to get ill and she's been constantly visiting her at the hospital almost everyday however she was offer a job as a actress over the past few courses so that way she can earn money and pay for her mother's medical bill , her boss has been making a few passes on her , to which she has been avoiding , it turns out that the man's married and has been having a few affair unknown to his wife, anyways due to her telepathically , telekinesis and precognition she is able to hear thoughts of knowing if the person she meets is bad or good ,holding or holding things without touching and able to see the future like for example (if she claims see in her mind that a cat has climb a tree) then it happens when she walks to the park and actually sees it happened.) despite having psychic abilities , she is rough around the edges , sweet at times but can also sing though she admit she is too shy to do so.

over a year ago pinkmare said…

a few trivia about her.

. Neither her parents have a psychic ability it was revealed that her grandmother from her mother's side is a medium.
.her mother's maiden name was Kobayashi before marrying her father.
.she looks exactly like her mother except for the eye color to which she receive from her father.
.she was once nicknamed. 'Little miss Sweet-n-Sour as a child because of her personality.
.she dislikes summer because the heatwaves drives her insane.
.she loves winter due to her love for the color white and blue and due to it's natural beauty of beautiful snowflakes falling from the sky. 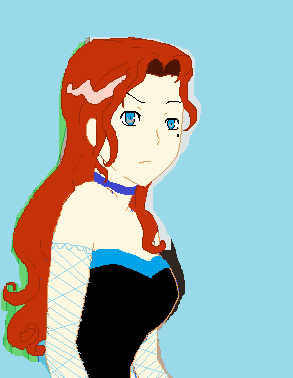