Ran Mouri (毛利 蘭 Mōri Ran?), also known as Rachel Moore in the Funimation dub, is a main protagonist in the manga and anime series, Detective Conan. She is the childhood friend and the romantic interest of Shinichi Kudo and the daughter of Kogoro Mouri. 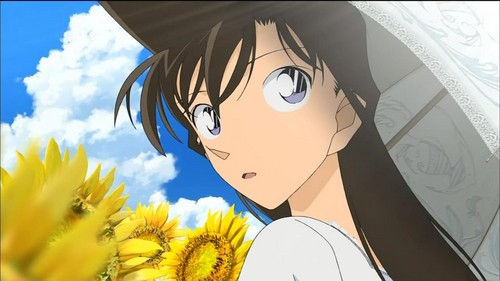 Ran is a childhood friend of Shinichi Kudo. She is the daughter of Kogoro Mouri, a private detective, and Eri Kisaki, a lawyer. Her parents separated when she was seven,and one of her biggest goals is to get them back together. Her best friend besides Shinichi is her classmate Sonoko Suzuki, who often teases her about her relationship with Shinichi. Her other friends include Masumi Sera, Kazuha Toyama and Heiji Hattori.

Ran first met Shinichi back in Sakura class. Ran began liking Shinichi when she noticed he was wearing a paper name badge like her, so she wouldn't be bullied for being the only one without a proper badge. Unknown to her, her home room teacher was secretly planning to kidnap her, which Shinichi - with his father's help - foiled. Ran seemed unaware of the plot.

When Ran and Shinichi were six, they snuck into Teitan elementary school at night to uncover the truth behind a hat-wearing monster rumor. They met the elder Kaitou Kid in the school library who played a nasty prank on them before handing over a code inside a leather wallet. With the help of Agasa, Shinichi and Ran partially solved the case and Shinichi started to informally call Ran by her first name. That same year Ran met Fusae Campbell who was waiting to see if Agasa would appear at their promised meeting place. Fusae gives Ran her umbrella and asks Ran to buy one of her designer purses when she gets older.

Before a year before the series' start, Ran and Shinichi visited Shinichi's parents in New York which they took advantage of, since Kogorō was on a community trip. She was there when Shinichi solved his first case and gained recognition as a detective. They met Yukiko Kudo, his mother, and her actress friend, Sharon Vineyard (the public face of Vermouth, a member of the Black Organization). Later that evening, she encountered Shuichi Akai who warned her there was a serial killer on the prowl in the area. Ran later encountered Vermouth in disguise as the serial killer. Vermouth would have fallen to her death, but Ran caught her arm and Shinichi helped her pull Vermouth to safety. Due to this, Vermouth gave Ran and Shinichi the nicknames "Angel" and "Cool Guy", respectively Vermouth later showed hesitance to kill Ran and later Conan Edogawa (Shinichi's childhood form) as well but whether or not it was because of any emotional attachment is unclear. It was during this trip that Ran realized her true feelings for Shinichi, finally realizing that she is in love with him.

Before the tropical land meetup, Shinichi and Ran visited Beika Aquarium together where Shinchi solved a case. After the case Shinichi accidentally making her drop her new cellphone on a sewer, he promises to replace it and take her to Tropical Land if she wins the Karate Championship as an apology, she also half-jokingly demands her new cellphone to be strapped with a sea cucumber strap, which Shinichi actually got for her.

After Shinichi's disappearance while on a trip to Tropical Land Amusement Park with her, Ran met Conan, who was introduced by Professor Agasa as a "distant relative". At Agasa's request, Ran agreed to look after him, and immediately came to think of him as a surrogate little brother.Ran has come to suspect Conan's identity multiple times, but Conan always manages (helped by his friends like Ai Haibaraand even Kaito Kid) to find a sufficient alibi to satisfy her concerns

Ran's greatest personality trait is that she genuinely cares for those she loves. She is also patient, kind, and nurturing. She has a very overwhelming personality, quickly able to intimidate people when angered. Like Shinichi, she highly values justice to the point of idealism. To avoid making Shinichi choose between her and his important case (which is actually useless because Shinichi has turned into Conan and can't return as of now), she has decided to wait for him to finish it, trusting his promise that he will come back, despite their separation causing Ran a lot of emotional pain. Ran is also very hot-blooded and tends to act on impulses when the people she cares about are involved; the combination of jumping to conclusions and not hesitating to use karate on those who she perceives to have wronged someone have led to several "near-miss" misunderstandings. She is also not above using martial arts as a subtle threat to keep people, including her father, in line. In earlier stories, she would become violently suspicious if she thought Shinichi was philandering, although more recently his confessions (in the Holmes' Revelation Arc) have led her to trust his intentions.

Ran can be very brave and resourceful when she wants to be, and has rescued Conan from trouble on many occasions. She has remained bold, steady, confident and calm in many situations that would usually cause others to remain frozen in fear, such as being threatened by a gun  or surrounded by flame. However, she has an irrational fear of the supernatural and is thus — unlike her friend Sonoko — absolutely no fan of anything related to the horror genre. She also constantly tries to reunite her father and mother again, though with little success, thanks to the mutual stubbornness of both parents. Ran is typically unaware of her own attractiveness, and usually remains oblivious when men try to flirt with her, often to Sonoko's exasperation, who believes her wait for Shinichi to be hopeless. If made aware, Ran doesn't respond in kind due to her feelings for Shinichi. Even though Ran is in love with Shinichi, she has repeatedly failed to convey her feelings because she suddenly becomes self-conscious.

Ran is very self-sufficient for her age, since her father Kogoro is often drunk, slovenly, and fiscally irresponsible. She handles many of the Mouri household's financial affairs and all the cooking and housework. She also ensures Kogoro doesn't slack off on his job, is on his best behaviour for client meetings, and she often greets and provides refreshments for potential clients. She also appreciates fine art. Ran is noted by both Shinichi and Shuichi Akai as one who "cries a lot".

Ran also seemed to have a sense of noticing when something seems wrong or strange, although she doesn't always figure out on her own what it is. Like in a case where a ganguro woman was killed, Ran could feel that there something that didn't fit in with the victim's look (the killer had switched platform boots with regular shoes). And during the Macademy awards Ran noticed that Shinichi's father who was on TV (who was Yukiko in disguise) behaved 'cute'.

It has happened that Ran, like her father, can become serious about a case, if it involves something personal to her. During the Night Baron murder, where she realized that the most likely suspect was a karate champion, she admired, she decides, after considered what Shinichi would have done in her situation, to try find proof of the champion's innocent. Another time she helped an old classmate, accused of theft, proving her innocent.

Ran also likes to rush wherever she goes, believing both her name and nature to be like the word "Run" from English. She even said to Shinichi, "My name is Ran! I was born to run!"

Ran is a light-skinned girl of average height. She is slender in frame, yet sports an athletic and curvaceous build. She has big bluish-purple eyes and dark brown hair. Her hair is straight and hip-length, tucked behind her ears with short wavy bangs over her forehead. What was originally a wave in her bangs has evolved into a stylized triangular point as the manga has progressed. Ran is also very beautiful, as described by many characters throughout the series. Many men have become infatuated with her in the series, as noted by Sonoko (much to Sonoko's annoyance). Eisuke Hondou had openly confessed before Conan that he was in love with Ran (though the statement's truth is somewhat doubted). Ran was once even offered a modeling job. 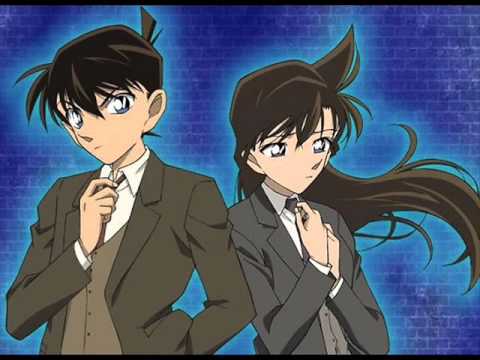 Ran with her childhood friend,Shinchi