5
Dopple Crossed Chapter 11 part 1
posted by HaleyDewit
One mês later.
Damon was making breakfast when Elena came into the kitchen.
“Morning” she mumbled. Ever since Rebekah had forced her to drink blood she had been very distant towards Damon. This was his fault. If he hadn’t been so damn stubborn she wouldn’t have had to go help Stefan and she wouldn’t have been in that position. What if Rebekah had killed her? Then Elena would be a vampire now, all because of Damon’s brother issues.
“So, eh, what are your plans today?” Damon asked, trying to be casual. He knew he had a lot to make up for.
Elena shrugged. “Going to school, obviously. Hanging out in the Grill”
Damon nodded. “Yeah, of course” he said.
“Maybe you should make an appointment with Bonnie’s shrink” Elena said snarky. “At least she admits she needs help. You, on the other hand, you blame everyone around you, because it’s easier that way. But that’s not going to make the problem go away”
“I know” Damon said soft and remorseful. “But I’m really trying, Elena”
She finally looked at him. “Not hard enough”
And without having eaten anything she took her schoolbag and left the Boarding House.
Delena163, RedHood591 and 3 others like this 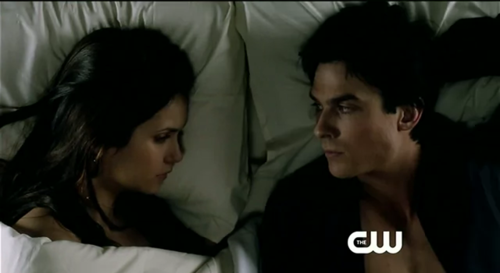 13
Delena
added by quinnfabray
11
Why Damon and Elena Are Better Than Stefan and Elena
posted by DelenaNianlover
I'm new here and I just wanted to share my views on why Damon and Elena NEED to be together. I wrote this for a friend to persuade her to cadastrar-se Delena, and this speech worked. I hope you like it.


​ Okay, so my speech consists of many parts. My first part is how they first met. Damon was just lying in the road, looking for his seguinte meal, when Elena comes and talks and he hears her voice. He goes up to and say “Katherine?”  “No, I’m Elena.” She replies. With that it takes him three segundos to find out that Elena is indeed Elena and not Katherine. (Even though he probably could have...
continue reading...
19
ANOTHER EMAIL FROM LJ SMITH TO A DELENA fã
posted by jendelena
Hi —

You see, I’ve been fired from The Vampire Diaries—mainly because instead of
giving my publishers the strict Stelana they demanded, I went ahead and
wrote what my coração told me...
continue reading...
56
50 reasons why Damon&Elena belong together.
posted by chairbuck12
Was made on the CW Lounge before it was taking over por Bamon fans!
----

1. Elena brings out Damon's humanity
2. Elena is the ONLY female main character who hasn't been bitten por Damon yet.
3. In the segundo episode, Damon says that he can clearly see why Stefan is so smitten with Elena....because of course, Damon is smitten with Elena himself.
4. Damon needs someone sweet like Elena in his life to heal his broken heart.
5. Damon kisses Elena's hand when she goes to leave.
6. Elena saves Damon, and is clearly scared for him.
7. Damon is so gentle towards Elena, especially in the episode when he strokes...
continue reading...
133
Why Damon and Elena belong together (D/E vs S/E)
posted by MissDK
oi everyone...

When I was spending my summer holidays anno 2009 in Buffalo, NY, USA, I was thrilled to hear about a new Vampire TV show. And what made me even mais excited was the fact that the show will be based on books, called ”The Vampire Diaries”. I have never heard of this...
continue reading...
-3
The Darkest Side Of Me ch.3
posted by yasmeen40
originally written por : SuchALittleMonster on FanFiction.net

In the blink of an eye he was up on his feet, he was perfectly fine. I felt the mural against my back, I had no where else to go. Surprisingly he didn't...
continue reading...
20
LJ SMITH EMAIL TO A DELENA fã
posted by jendelena
Anonymous 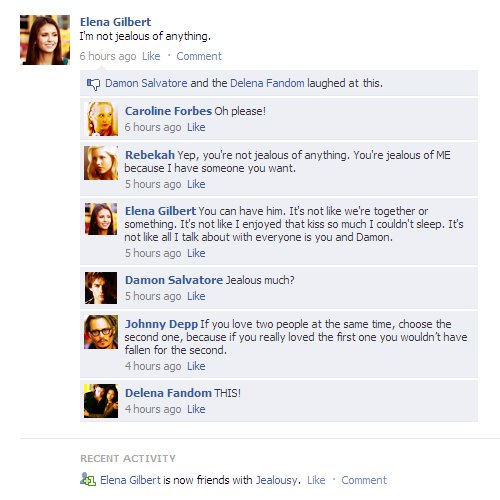