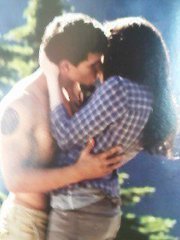 2 weeks later.
I had successfully managed to spend 2 weeks without Edward. No Talking. No Looking. No Communication! Tomorrow I would be flying to Jacksonville to spend time with my Mother for 7 weeks. I had to get away from here. Away from him. I began packing I placed clothes, my I -pod, mp3 player and laptop in my bag too. I then moved the case to the door of my room. I went over and opened the curtains so he could see me packing up my life because of him. As soon as I opened them I saw him sitting at his escrivaninha, mesa staring at my window, when he realized I had opened the curtains for the first time in weeks a small smile spread across his face. He must have thought I had forgiven him. God he was wrong. I turned and walked to my escrivaninha, mesa so that my back was to him. As much as I hated him right now I needed him to know why I left so I decided to write him a letter that Charlie could give to him once I had left.
Dear Edward, por the time you receive this letter you will know that I have left. As much as I don’t want to talk you after the past 16 years of friendship I thought I owed you this. I shall be away for seven weeks. As much as I want to say when I come back stay out of my life, I cant because I have been keeping a big secret from you for quite a while. Im in amor with you. So there you have it, as much as I wish you feel the same way its evident you don’t and never will. I will see you when I come back after im over you, your my best friend and I don’t want to loose that, ever! So you can email me during the summer. And do not under any circumstances say you amor me too, because its not fair on me. Goodbye Edward.
Bella.
I was now crying in the process of sealing the envelope. With that I lay in my cama and cried myself to sleep again. Waking up in the morning I went down and said to Charlie to give him the letter to give to Edward. I was looking out the window when arguing brought me out of my dia dream. I went out to find Jacob and Edward fighting. Oh God I thought to myself. I noticed how terrible Edward looked. He looked like he had lost weight and hadn’t slept for months. I walked over and grabbed Jacobs face and began to kiss him passionately. As I broke free I turned to Edward who was close o tears. With that I said Goodbye to both Edward and Jacob and left in the car not looking back.

18
The prom HD
added by Seraphiene