Michael, Roger, and Anthony From Seanthehedgehog

Anthony, And The Important Passenger

Hawkeye was sitting with Stylo at a bench. Both ponies were waiting for a train to arrive, so that they could drive it. However, Hawkeye had a guitar, and was playing Hound Dog, por Elvis Presley.

But before Hawkeye could start the story, the horn of a nearby train could be heard.

Stylo: *Looks to the left* That's our train. Let's get ready.
Hawkeye: Okay, I'll tell you the story when we get onboard. *Putting violão, guitarra in case* Hey, you know what really surprised me?
Stylo: What?
Hawkeye: We just had our very first argument. After being friends for three years, we finally found something to be angry at each other for.
Stylo: Yeah. Just don't play that song when we get on the train.
Hawkeye: Okay, I promise. Can I at least play Long Tall Sally por Little Richie?
Stylo: No!

Nicole has gone through many exciting adventures in her life when she used to work on the Northern Pacific. She was telling...
continue reading...
2
Ponies On The Rails Episode 49 Part 1
posted by Seanthehedgehog
Theme song >>>> link

Buses Are Worse Than Trains

One day, At Mirage's house, he was getting ready for work.

Mirage: *Breathing in fresh air, and looks all around him* Another beautiful day, and mais time for me to work.
Colts: *Running to...
continue reading...
1
magnum Force Part 11
posted by Seanthehedgehog
In the office of Lieutenant Briggs

Briggs: *On the phone* Yes. Understood. *Hangs up*
Harry: *Walks in*
Briggs: You were supposed to apprehend Pollanchio, not insult him. You weren't doing your job, and you could get fired for that. Now you let Frank escape, so answer me this. What the fuck do I tell the captain? Huh? What?
Harry: You can tell him that a traffic cop is making all those kills.
Briggs: A traffic cop? You expect him to believe that a traffic cop is killing off everypony? Who?
Harry: *Looks down at floor* Charlie McCoy.
Briggs: Harry, I was just on the phone with Charlie's ex wife....
continue reading...
1
Ponies On The Rails Episode 42 Part 3
posted by Seanthehedgehog
Hawkeye, Stylo, and Mirage went outside, where Pete, and the bus driver were arguing.

Drunk Bus Driver: I don't give a shit what you tell me! I am taking all your fucking passengers away from the train, and to wherever they need to go in the town of Cheyenne!!!
Pete: You're not allowed to! Those ponies want to get on the train, not the bus!
Drunk Bus Driver: Who would want to get on the train?!?
Pony 36: I would.
Pony 57: Me too.
Pony 98: It's better than taking the bus!
Drunk Bus Driver: *Gets in bus, and drives away*
Hawkeye: Are you alright Pete?
Pete: Yeah. All we did was shout at each other....
continue reading...
1
Hedgehog In Ponyville: Episode 8 part 2/2
posted by Seanthehedgehog
Previously, we killed some people holding Princess Cadence hostage. Shortly after arco iris, arco-íris Dash's arrival, we turned back to normal.

Sean: Our disguises are gone. Cadence, do you know any spells to make us look like one of them?
Cadence: No I don't.
Sean: Alright. *gets map of castle* We've got a lot of ammo, explosives, and we need to create a lot of confusion if we're getting out of here alive.
Rainbow Dash: What should we do?
Sean: Dash, I want you to place some explosives in this room, most of them should go por the door, for when the enemy tries to open them, they'll die.
Shredder: There's...
continue reading... 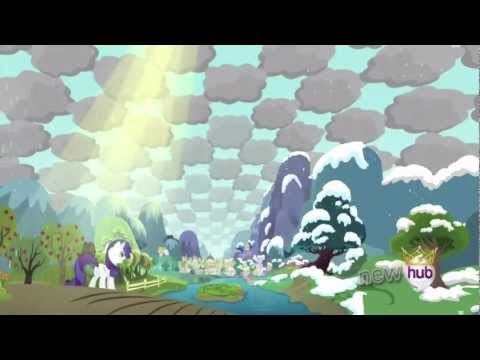 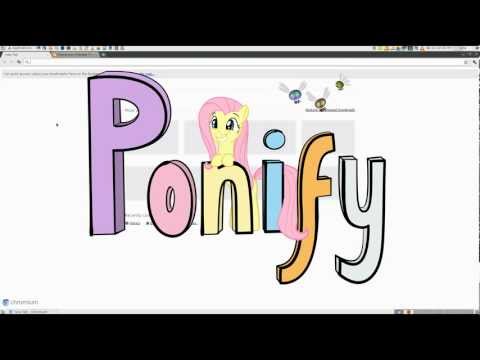 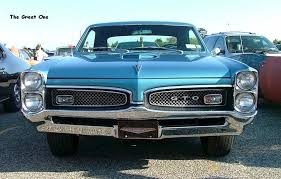 John's car
The stalkers were getting closer.

Richard: Come on, two hooves! Take the hat off! *Takes Thomas' hat off* That's great *Finds money*
John: Is it?
Richard: Now take your camisa off.
John: We already got the money we don't need to-
Richard: Take your camisa off!
Stalker: *stops car on bridge*

The two stalkers got out, and one was carrying an assault rifle.

Then all of a sudden, the gun accidentally went off, and killed Thomas. 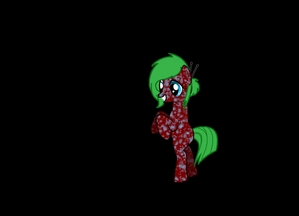 Erica
After the Flim Flam brothers left with Dexter, another pónei, pônei walked in.

??: Hey. Are you alright?
Applejack: *Stands up* Who are you?
?? My name is Erica. You three should get some medical attention.
Applejack: We can't right now. I gotta go after those ponies that beat me, and my cousin up.
Erica: I think I saw them. Were they two unicórnios with an laranja pegasus?
Applejack: Yeah. Where'd you see them?
Erica: They just left the warehouse.
Applejack: Ok. Wake up Braeburn while I untie my sister. *Goes to Applebloom*
Erica: *Walks to Braeburn* Exuse me. Sir?
Braeburn: *Hits Erica*
Applejack: Braeburn!...
continue reading...
2
Ponies On The Rails episode 13 part 2
posted by Seanthehedgehog
Pierce was very mad. He ran towards a truck, and started raging.

Hawkeye: A perfect time to scrap engines, just because they run on steam! *breaks truck window*
Jeff: Hawkeye? What happened?
Hawkeye: Pete is going to scrap an engine!
Jeff: Which one?
Hawkeye: I don't know, some 2-8-0.
Jeff: Oh. Sorry for your loss. *walks away*
Hawkeye: AAHH!!
Gordon: *Walks up to Hawkeye* Hey! Nopony is supposed to do idiotic things but me.
Hawkeye: Fuck off Gordon, I'm in a bad mood right now.
Gordon: No, I'm not fucking off, I just want to know why you're atuação like this.
Hawkeye: Pete is scrapping a steam engine....
continue reading...
1
Middle School Part 18
posted by Seanthehedgehog
Just when Jeanne was walking away, Mrs. Stricker arrived.

Mrs. Stricker: What in the world were you thinking when you kissed him?
Jeanne: I was happy for him. He offered to do something very nice, and-
Mrs. Stricker: No, unacceptable. No matter what, you cannot kiss other ponies in this school.
Rafe: That's so unfair!
Mrs. Stricker: Watch your tone, Mr....
continue reading...
1
Octavia Unchained part 1
posted by Seanthehedgehog
Theme song: link

Warning: This fanfic is rated R for lot's of violence, strong language, and is intended for a mature audience. Viewer Discretion is advised

A story with a sad intro

As you probably know, in Equestria there are mais mares (female ponies) then there are stallions (male ponies). Because of this, nearly all the stallions placed much of the mares in slavery.

One of these mares is Octavia, and this is where her story begins, in Canterlot

Octavia: *Walking with other mares*
Stallions: *walking with mares, carrying whips*
Mares: *Walking to bus*
Octavia:...
continue reading...
2
Ponies On The Rails episode 11 part 2
posted by Seanthehedgehog
Later that day, Pete called everypony down to the station. Gordon was already there, because of his timeout.

Pete: You all did an excellent job. Tomorrow, none of you need to come into work.
Ponies: Oh sweet.
Pete: But.....
Ponies: *Waiting*
Pete: I do need two volunteers to work the night shift.
Gordon: The night shift, how do you do that?
Pete: You got to carry a train of Chevy's to a dealership in St. Foalis. You can ride another train back here when it's done, and enjoy your dia off.
Hawkeye: I'll do it.
Pete: You'll need a fireman. Anyone will do.
Hawkeye: Ok, uh Red Rose?
Red Rose: Sorry,...
continue reading...
2
Ponies On The Rails episode 9 part 1
posted by Seanthehedgehog
Running from Chicagoat to San Franciscolt is a railroad called the Union Pacific. It's the largest railroad in the United States, and is run por thousands of ponies. This is the story of some of those ponies that run the rails, aka railroading.

Bartholomew "Not so" Perfect The 55th

At the station in Cheyenne, Bartholomew was getting ready to conduct a passenger train.

Gordon: *Looking at map of Equestria* Hey, Bart! Do you know how long it would take to get to Germany from my place if I was driving?
Bartholomew: Perhaps you should try looking at an actual world map instead...
continue reading...
5
Ponies On The Rails episode 8 part 2
posted by Seanthehedgehog 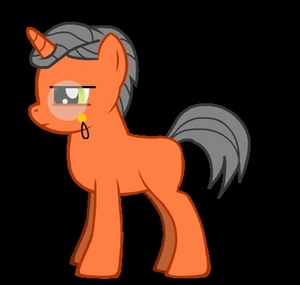 Pete: What we need to do is hire a new unicorn, and get him to find out about what Gordon is up to.
Orion: Like a spy?
Pete: Yup.
Bartholomew: *teleports seguinte to Pete*
Pete: This is our new worker, Bartholomew Perfect the 55th. He's british, so don't make fun of him for that.
Coffee Creme: Uh, nopony makes fun of the british at all.
Pete: Ok then. Good luck *walks away*
Hawkeye: Hello Bartholo- lomr- mew
Bartholomew: *laughs* You don't have to call me por my full name. Bart will do nicely.
Hawkeye: Oh, hi Bart.
Bartholomew: Hello. I must say,...
continue reading...
1
Hedgehog In Ponyville 7 part 7
posted by Seanthehedgehog
Spike was recaptured, and they continued taking him to Canterlot. Still, could be worse.

Fluttershy: Oh no! mais airplanes!!
Rainbow Dash: *holds gun for Sean*
Sean: No, keep it. I have another one *grabs .44*
Rainbow Dash: If you say so.
Applejack: Why can't these humans give up?
Sean; They're Nazis, they don't know how to give up. *shoots at airplanes*
Airplanes: *pass*
Rarity: They're not...
continue reading...
1
Ponies On The Rails Episode 4 part 1
posted by Seanthehedgehog
Running from Chicagoat to San Franciscolt is a railroad called the Union Pacific. It's the largest railroad in the United States, and is run por thousands of ponies. This is the story of some of those ponies that run the rails, aka railroading.

Pete: *driving train at 10 miles an hour, then stops* Hello. I'm the controller of the Union Pacific. This engine I'm driving is not only fast, but it's the world's largest engine, and can pull a train five miles long. The Union Pacific. Power in everything.
Director: Aaaaand cut!! That was excellent.
Pete: Thank...
continue reading...
1
Ponies On The Rails episode 2 part 2
posted by Seanthehedgehog
The B&O worker came back with his boss.

B&O boss: Ok, so you want to take three 4-6-2's in favor of these diesels?
Hawkeye: Yes sir.
B&O boss: Hm. There could be a problem with this.
Coffee Creme: What is it?
B&O Boss: Ah never mind, just a joke. Those three engines you want are over there. They're all yours.
Hawkeye: Thank you so much. *goes to engines*
Coffee Creme: *follows*
Hawkeye: Now we have new engines for the line, and we have less diesels. Let's do this.

The two ponies got the first engine started up, and pulled the other two.

Hawkeye: Now we give these two a run on U.P...
continue reading...
1
Slycall part 7
posted by Seanthehedgehog
After Snow got her revenge on Con, she went back to HQ. As for Con, and Blu, they were on a barco heading to Maredagascar.

Blu: Will you be able to save me?
Con: *turns on transmitter* I believe so.

When they arrived the town was deserted. The only ponies on the streets were Con, Blu, 7 koreans, and a mexican pónei, pônei walking toward them.

Heckler: Hola everypony.
Con: I assume that a pónei, pônei named Vetrice was working for you.
Heckler: You're correct, but how?
Con: I killed him, and he told me it was a mexican.
Heckler: Let's talk somewhere a little mais private shall we?