You see, I’ve been fired from The Vampire Diaries—mainly because instead of
giving my publishers the strict Stelana they demanded, I went ahead and
wrote what my coração told me to do. They wanted Elena to “realize that she
was fond of or physically attracted to Damon, but that her one true amor was
Stefan.” But I didn’t see the series that way. And so Midnight is the last
Vampire Diaries book you’ll see por L. J. Smith.

You’re probably wondering how this can happen, since I write the series and
have done so since 1990. But the truth is simple. When I got a call asking
me to write a vampire trilogy for Harper, it wasn’t Harper who was calling
me. It was a book packager, now called Alloy Entertainment, calling on
Harper’s behalf. Their job was to take authors’ work, put blurbs and
covers on it, and sell it to a publisher. When I wrote the first Vampire
Diaries trilogy it was called “work for hire.” por the time I found out what
that meant it was too late.

What it means is that the book packager, Alloy Entertainment, owns the
books, not me. Even though they are copyrighted to me, I still can’t write
them without Alloy’s permission. And they really hated any Delena
content—as well as the many scenes I had given to Bonnie, which they wanted
to cut. They demanded only Stelena. And now they’ve gotten an anonymous
ghostwriter to do the books, the way a ghostwriter does Stefan’s Diaries.

The first book out after Midnight will probably sound something like my
writing, since I wrote Phantom for them. But instead of edits, what I got
back after I wrote it was a letter addressed to the ghostwriter por name,
telling her to completely rewrite the book.

I have been fighting, coaxing, and pleading with the people at both Alloy
and Harper, as I already had the seguinte two books after Phantom mapped out.
But there is nothing to be done. They simply didn’t like the way the
series was going, and unlike most writers who work with book packagers, I
was not submissive, meek, and eager to please them. Instead, I had my own
vision of the books. But you can kiss any mais truly meaningful Delena
moments goodbye, because I’m afraid it just isn’t the view of Harper or
Alloy.

Meanwhile, I am devastated. Of course I have other series done directly
with a publisher: The Forbidden Game, Dark Visions, and the Night World
books. But I put so much of myself into the Vampire Diaries books that
right now I’m devastated. I never imagined anything like this could happen.
But still, I can’t say that I regret having written Shadow Souls or Midnight
the way I did. I wrote what I did because that was the vision I saw of the
characters.

I’m just sorry that from now on Delena readers will have no hope of anything
other than a Stelena endgame, and that written por someone who will do
exactly what she is told.

Lisa
L. J. Smith
manar1310, TheExcorcist and 17 others like this
TriineA WHAT THE FUCK? IS THIS FOR REAL?
smokinhawtie WTF?! THEY CAN'T DO THIS!
Damonlover This is not just about Damon and Elena or Bonnie or whatever other ships or character you love from these books but it is about a woman who has dedicated over 15 years of her life to this series. It is her baby! She should be able to finish the book the way she wants to. Let Harpers and Alloy know that you want L.J. Smith to finish the series by e-mailing them at: info@alloymarketing.com. Let them know you won’t be buying the books if there is a ghost writer involved. Let yourself be heard! (from @ http://anditsdraining.tumblr.com/post/3137484606/l-j-smith-creator-of-the-vampire-diaries-books-fired )
NateHeartSerena We should definately make our voices heard to these moronic publishers. The Delena fanbase is so large it has been compared to a global army. Stelena has a big fan base too. And Bamon fans sure know how to be vocal and now we can even get Forwood fans and Steferine and Beremy and Staroline and Tonnie fans in on it. We should get the entire vampire diaries fanbase to pull together on this one. We owe it to LJ Smith for starting the series that gave me my favourite TV show.
Nutika Stupid! How publishers could be so stupid!!!
katie15 So they're pissing on the two biggest fanbases?! Great thinking publishers! That's the best way to get buyers...
darkdoll59 I don't think BD is one of the biggest Fanbases but they are bigger fanbase them SE so yeah , if the company wants to make money they should have wanted DE as endgame because we are the biggest Fanbase in TVD diaries way to go for them
epicdelena4ever they just lost 80% of there buyers.....good for them! now they will get NOTHING...casue the ONLY ones who will buy the book is stelena...how stupid is THAT! well good luck to the new writer who will make NO MONEY!!!!!!! casue no ones wants SE endgame WTF!!!!
veronicaaa soy fan bamon y aunque suene ironico yo creo que debemos tratar de resolver esto como pueden ser tan idiotas los fans delena son muchisimos y los bamon bueno tambien los stelena pero creo que quieren un vampire diaries como en la serie con un damon llorando y sufriendo por un poco de cariño de parte de elena y a cambio solo vera como ella se queda con stefan ademas que pasa con mi bonnie
angiii7 I can't believe this! This is sooooooo unfair! Fuck the publishers! NO ONE WANTS SE TO BE ENDGAME! I'm so fucking pissed right now!
Aubreykarew :/ :/ stupid publishers
delenasalvatore I saw this on vampire-diaries.net, but can this email possibly be true? What's the source? If it is real, then I'm sure LJ Smith could get another publisher who's willing to work with her and publish the stories she wants to write.
Eyelash I absolutely refuse to read Vampire Diaries if LJ Smith isn't the author.http://www.petitiononline.com/mod_perl/signed.cgi?ljsmith&1 SIGN THIS
StarrieNites When I saw this on tumblr I freaked out!! Even if I havent started reading the books, this upsets me SOOOOOO much.
Delenaness That's getting me down :( It makes no sense. They've fired L.J. Smith the original author of the TVD books, because she wanted Delena in it, which is btw the biggest fanbase??? Won't they make a pile of money??? No one is going to buy Harper Collins dull SE Fanficton written by a ghostwriter!!! But I believe this letter is true, cos LJ said before that she has fought because of Delena parts in Shadow Souls with her publishers. Maybe it will never be an official announcement from her publishers, cos they want to sell the books under her name. It's L.J. Smiths creation, only she should write the books or nobody!!!THEY ARE DESTROYING HER WORK!!! EVERYBODY SHOULD SUPPORT LJ SMITH AND DON'T BUY THESE OTHER BOOKS AFTER MIDNIGHT, COS THE CHARACTERS WILL NEVER BE THE SAME WITHOUT THE INVENTOR!!! We all should give HarperTeen/Alloy Entertainment a tongue-lashing. To e-mail: info@alloymarketing.com or: nycassistant@alloyentertainment.com and on Twitter: @HarperCollins
Delenafan2 What kind of idiot publisher would fire a writer from her own book series?! Seriously?!! What bloody assholes!! Boo hoo, she didn't write it how they wanted it. It's HER creation and she should be allowed to finish it how she sees fit. I signed that petition and am #417. If she's not writing any more of the books, I for one will NOT be reading them.
Delenaness BTW irony of fate that after Midnight the next book is called Phantom and will be written by a phantom O.O
bussykussi so i have send a email and i hope they thinking again about this thigs
delenaisluv Where do I sign the petition? I am ready with my pitchfork. This is LJ's book series, not someone else's. IDJITS!
5
A Bamon Fan's Response to 'People Hating On Ian' (I Come In Peace)
posted by ducky8abug
A Fan's Response to 'People Hating On Ian'

The author of 'People Hating on Ian' has adopted the notion that opinions diverging from her own are nothing mais than disgruntled attacks. I disagree.

We're all TVD fãs and we can agree that we all amor the show to a fault. In fact, I think TVD fãs are some of the most passionate fãs out there and quite frankly, that's great; but I don't want to see that passion manifest itself into something its not. I don't want to see it manifest into this accusatory system pitting one faction against the other. Trust me, it isn't necessary. A lot of us (including...
continue reading...
6
The Vampire Diaries - After Founder's Day: Chapter 2
posted by Triscia95
Elena’s POV
“Why don’t you sit down and we can talk.” I was pressed tightly up against the counter. “No need to be scared.” Katherine was smiling as she took steps towards me. “Katherine this is between Damon, Stefan and you not me.” Katherine tilted her head and shook it telling me no. “Honey this is about you.”

Damon’s POV
“How the hell could you do that? Damon I asked you to do this for Elena.” Stefan was furious. I just rolled my eyes. “Your just upset because she may also have feelings for me to, just like Katherine.”...
continue reading...
14
Memories of the Unforgotable:: Chapter 1: Denying it
posted by merzycullen
Chapter 1: Denying it

Damon Salvatore. Damon Salvatore. the name felt so familiar and comforting. it soothe me in times i thought nothing in the world could. at the time, stefan tried everything in his power to try and make me smile or at least make my worried dissaper. but he couldn't, as hard as he tried he just couldn't. it wasn't his fault. and it wasn't my fault for falling in amor with damon the way that I did, i'm not to blame. i mean who wouldn't fall in amor with Damon Salvatore?? he was the perfect guy. i loved him. but there were times that i couldn't admit that even to myself. damon...
continue reading... 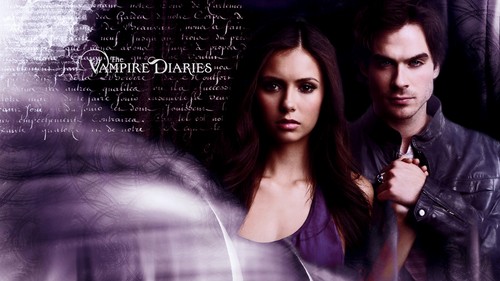 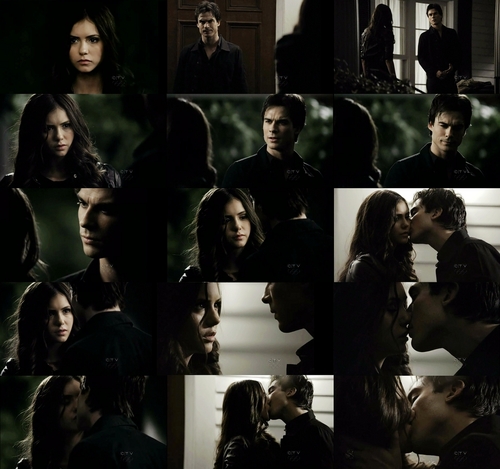 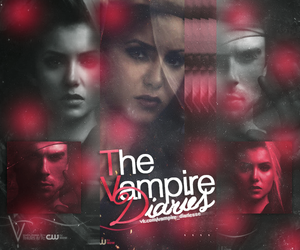 diários do vampiro
added by Hellen20