6
DE amor story: CH 3 "SK's Beginnings Anew"
posted by inuyashagirl82
Back one ano atrás when Stefan got shoved in that tomb this is where this story begins.

Stefan shoves Kat into the mural of the tomb.
She devilishly smiles, "That's the Stef that I know." He slaps her.
"More please!" She teases. Katherine wickedly smiles. Stefan's ire rises.
She taunts him once more. He throws her to the ground.
Kat's laugh grows, "Oh Stef, Come get me!"
Stefan's eyes turn red with fury and veins appear on his normally handsome
face. Katherine revels in his now monstrous beauty. Stefan rushes at Kat
and hits her hard and fast. She tumbles backwards. Her lip is now bleeding
so she licks her lip and gives Stef a wicked smile. Katherine rises quickly.
Tugs at one sleeve showing her one and only amor some skin.
"Come get it" She says in a seductive voice.

Stefan bares his razor sharp fangs at Katherine's seductive words. Stefan
appears right in front of Katherine in a flash. Stefan scratches her face
leave three deep Red scratches on her flawless features. The injury didn't
distort her eternal beauty. In fact she looked even mais beautiful. Kat's
dark chocolate eyes were full of amber intensity. She wanted him now mais then ever.

Katherine kisses Stefan but his face does not soften. Stefan leans
into Katherine's kiss with an intensity of his own. He grabs her subtle
shoulders hard and his nails dig into her flesh. She enjoys the pleasure
and the pain of this moment. Stefan is lost in this moment of heat and the
world outside of this kiss doesn't exist. Only Katherine's intense kiss.

Stefan pushes her away hard and demands "NO KATHERINE!"
She sensually slinks toward him "I know you still amor me."
She caresses his now calm face.
Stefan looks at her with his eyes pleading "But Elena is.."
Katherine sneers at that name. "She loves Damon can't you see that? Surely
you aren't blind!"
Stef's puzzled por Kat's words "What do you mean she loves him?
Kat looks at him with pity, "You really don't see?"
Stefan looks at Katherine with glaring intensity, "What PROOF do you have
that Elena LOVES Damon? THEY ARE ONLY friends NOTHING MORE!"
Katherine laughs at his glaring nativity "Oh Stefan, you don't see the
way she looks at him? She adores him above words. You can't fake a look
of endearing amor she's unknowingly giving him."
Stefan brow furrows, "You are lying! Such a Lying Bitch."
Kat looks at him with pity, "Poor sweet Stefan you're gonna lose your girl
to Damon." She slinks toward him in her Katherine way.

Katherine's Face is now inches in front of Stefan's. He urges to kiss her but
pushes that feeling down. Denying what he feels. He averts his eyes elsewhere.
Katherine looks endearingly at Stef. "Oh come now u can at least look at me?"
He shakes his head no. Kat grabs his chin forcing his face to meet hers.
"Listen Now!" She demands. Stefan's eyes still closed refusing to look at her.
She says in a strong voice, "Elena will never amor just you. Damon will always
have a place in her heart."

Stefan's teary eyes meets Katherine. He knows her words are true.
"Can she ever forget Damon?" He asks sorrowfully.
Katherine looks at him with a meaningful look. "What do you think?"
He looks at her with a most regretful look. "No" Stefan gives into this
realization. This woman he thought he loved so completely will never
forget Damon. He is in her heart. He wants to deny this with his very being
but he can not.

Stefan slinks down the mural with a sickening depression on his face.
He buries his hands in his face. Katherine kneels besides the broken
Man. She takes him into her arms. Embraces him.
Katherine looks at him with a heartfelt look "Stefan you should forget about
Elena, She will only break you're heart. Why do you still deny your feelings
for me?"

Stefan voice breaks, "Katherine.."
Stefan's face still buried into his hands. Katherine yanks Stefan's face out
of his hands. Forcing his face to meet hers. "Stefan look at me!"
Katherine looks into those magical hazel blue eyes. Sometimes they seem to
alter their color to adjust to Stefan's mood. Those eyes are filled with
heartache and Pain. His eyes are locked on hers and looks deeply into those
beautiful chocolate eyes.

Stefan leans progressivo, para a frente and kisses Katherine. He kisses her deeply and passionately.
Unbeknown-st to the two of them there are two familiar eyes are witnessing this scene.
These warm brown eyes are filled with tears as she watches Stefan passionately kiss
Katherine. Tears silently roll down her delicate face. Stefan kisses Katherine
deeper still. Elena is in disbelief at what her eyes are witness to. She wants to
cry out STEFAN WHAT ARE YOU DOING! But no sound escapes her lips she is just
Frozen - Uma Aventura Congelante there in her misery.

Damon suddenly scoops Elena up with a rápido, swift grace. Elena is unaware she is not
still Frozen - Uma Aventura Congelante at that cave entrance. The scene replays in her mind over and over.
Damon kisses Elena on the forehead to try to soothe her wounded soul. She's
still unaware. Damon calls out her name but Elena only faintly hears his
attractive voice. It beckons her soul back from the darkness she was surrounded
with. Her eyes slowly look up at the beautiful face that is concentrating on getting
Elena away from that place.

Elena says in a small voice, "Damon.. What... happened?"
Damon holds his advance and looks at the confused Elena.
Damon says in a strong beautiful voice "You said you were feeling sick
so I'm bringing you home."
"Oh really," she says with some enthusiasm. "I'm feeling OK now, Thank you."
Damon looks at Elena sweetly. "I will always look after you my dear."

Damon did not have the coração to let Elena suffer Stefan's betrayal. He compelled
her to forget that scene. It would only bring her pain. Damon held his anger
inside but wanted to lash out at Stefan. He has Elena's amor and yet chooses
to kiss Katherine. What a selfish bastard he thought!

Although Damon has no desire to get that traitorous bastard out of the tomb he
decides it will be best for Elena is he helps him out of there. Elena is his
coração and soul and he refuses to let her suffer.
TheExcorcist, HollyMarie and 4 others like this
delenaluv can you please forward this to k/w and j/p so they can remember what real writing looks like cause they seem to have forgotten with that disappointing last episode.this is how it should have played out.its not like we would have jumped to d/e cause you shouldnt rush perfection but it would have been a more relevant episode. damon made her forget what she saw so the writers would still have plenty of time to keep building them up.kat is still in the tomb so maybe they can shove stefan back in there and play it out this way.then damon would get his ass of a brother out to make elena happy. i did read ian say he was gonna get stefan out of the tomb . the old damon wouldnt have done that. but they also said it was real cave sex. are they having the actors lie to us now in interviews.
I_DONT-KNOW i agree with delenaluv

Aquarius and Temperament:
Aquarius tend to be rebels just for the sake of having their own way. Their stubbornness sometimes causes their failure, they will continue...
continue reading...
56
50 reasons why Damon&Elena belong together.
posted by chairbuck12
Was made on the CW Lounge before it was taking over por Bamon fans!
----

1. Elena brings out Damon's humanity
2. Elena is the ONLY female main character who hasn't been bitten por Damon yet.
3. In the segundo episode, Damon says that he can clearly see why Stefan is so smitten with Elena....because of course, Damon is smitten with Elena himself.
4. Damon needs someone sweet like Elena in his life to heal his broken heart.
5. Damon kisses Elena's hand when she goes to leave.
6. Elena saves Damon, and is clearly scared for him.
7. Damon is so gentle towards Elena, especially in the episode when he strokes...
continue reading...

1
2.11 por the light of the moon
added by lizzie_jo5
Source: spoiler tv

you bring out the human inside me.
added by DelenaLover
Source: tumblr

Damon & Elena || Give you all that I am ... (preview + link)
added by vanszerelem
video
visualização
delena
damon salvatore
elena gilbert
diários do vampiro 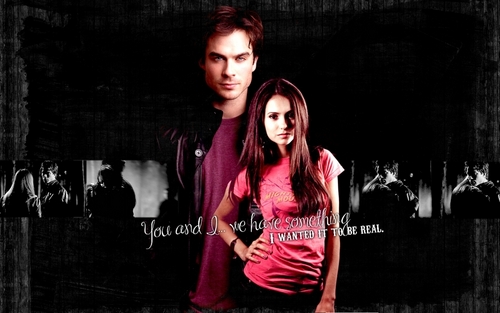 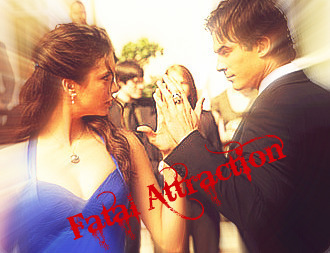